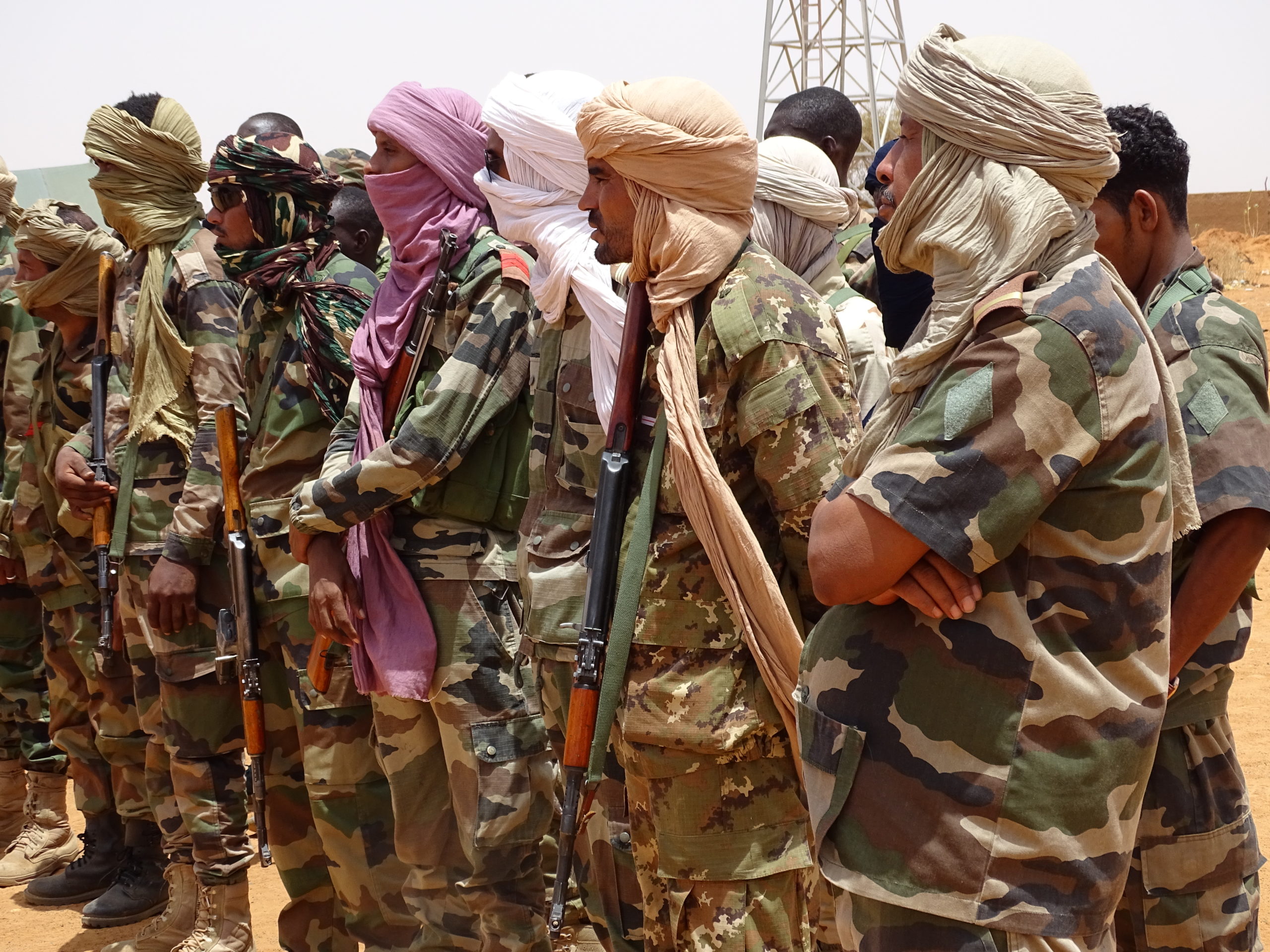 A short insight of EUTM MALI’s most significant training challenge.

Sixty eight (68) personnel, some nervous, other less so, stand before the European Education and Training Team. It would almost remind you of Day 1 with a new recruit or cadet intake at home, almost but not entirely. This however is a raising order (Military term referring to the gathering together of troops or soldiers in preparation for combat) unlike any other. A quick scan reveals a significant age differential, from the twenty something, to the fifty something, they’re all here.

A plethora of headdress variants from the Beret to the Arabic Keffiyeh (headscarf) reflect a multitude of military, personal and cultural backgrounds. The presence of four (4) Interpreters compounds the group geographic differentials and is an indicator of the challenge ahead.  Finally, a closer look reveals weathered and hardened faces. This is a silent clue that many of these men have significant combat experience having been on opposing sides in past conflicts that political engagement, peace agreements and professional training are trying to bring to an end.

Seven (7) years prior to this moment, on the July 24 2014,  a peace accord known as The Algiers Process was brokered to establish a national and durable peace plan in order to guarantee a definitive solution to the crisis in Northern MALI, known by some as AZAWAD. Chapter 8 of this agreement referred to Disarmament, Demobilization and Reinsertion (DDR), of non-government ex-combatants.  An initiative to reintegrate those lost to various TAGs (Terrorist Armed Groups) or other non-government forces pre and post 2013. The incentive – ultimately for the end user, a more organized existence with an initial service payment followed by a regular and reliable salary, an incentive that has attracted in excess of 30,000 applicants thus far. Graduates of the DDR process are organized as reconstituted units within the MaAFs (Malian Armed Forces) and are ultimately redeployed throughout the Northern Regions to facilitate the return of security to these regions. Training responsibility of DDR personnel lies primarily with the MaAF but the International Community contributes. In this case it’s the turn of EUTM (The European Union Training Mission in MALI).

Historically, EUTM’s past has been focused on centralized training within the vicinity of the country’s capital BAMAKO but the exigencies of the current situation in country and the dislocation of fighting troops has required EUTM to become expeditionary meaning EUTM have re-located closer to the trainees, thus closer to the areas of conflict.

No less than twenty-five European Countries contribute professional military trainers to the mission. These trainers with a multitude of instructional skill sets and experience are broken into mobile training teams (MTTs) in an attempt to achieve the EUTM Mission Statement, “To contribute to the improvement and capabilities of the Malian Armed Forces.”

This particular task, directed by our Education and Training Task Force Commander Col Rafael DENGRA and implemented by our Chief Instructor Lt Col Alexander BAUER would present a challenge like no other to a carefully selected European Training Team. The Training area itself is a Malian Armed Forces Camp, outside GAO or GAWGAW city, a historically important commercial center for trans African Trade, 320km EAST of TIMBUKTU on the banks of the River Niger, a gateway town to the Sahara  and as Irish trainer, Sgt Gerry O’Gorman from Ireland reminds me,  “It’s a long long way from TIPPERARY!”.

The Training Team deployed to GAO, consists of Latvian, French, Austrian, German, Irish and Lithuanian Trainers. Spanish comrades provide a security element. This security allow the training team to concentrate on their task, whilst an ex-British Forces Sgt and a Ukrainian Doctor provide medical cover, it’s a mixing pot of personalities and culture that somehow works.

Conditions are difficult for all, especially so for the trainee students, they also have been brought together by the demands of their profession, but unlike our team, theirs is fraught often with distrust and cultural difference that simmer constantly. However, shared hardship has a way of breaking down boundaries and creating positive group cohesion. That’s how military training is designed.

The Course Leader, Captain K. K. from Latvia, focuses on a “Move – Shoot – Communicate – Medicate” training plan, knowing that to impart these skills, best prepares the trainees for redeployment to the Northern Regions of KIDAL and probable conflict.

Theory lessons, such as land navigation, International Humanitarian Law are tediously translated through French, TAMASHEK & BAMBARA. These are followed by intense practical exercises. It is not easy.

Crawl, move, shoot, communicate, medicate, repeat and repeat and repeat. The training aim focuses on developing an instantaneous and effective reaction to enemy contact, and building on this by drawing on an array of military skills to ensure mission success.

The trainers focus on the junior leadership within the KIDAL Company, those that by Rank will burden the responsibility of command, whose action or inaction can have serious consequence.

Down time leads to open discussions, the MALIAN soldiers share their personal experiences in the field and trainers listen. The Malian soldier’s families are accommodated within the grounds and they too build a rapport with trainers, often curious to hear stories and to extend the MALIAN welcome. The entirety of this project is far from one way but rather a cooperative, a symbiotic relationship where shared knowledge and skills are the byproduct.

The process is not without its challenges; a short timeline with the Company feels more compressed as their deployment date beckons. The trainers always want to give more but they have a common enemy, the sun is relentless in the training grounds, the mercury does not fall below 44 C on any training day and often screams 50 C, personal administration, hydration and an ability not to overreach are key in maintaining their ability to impart correct and quality military instruction.

Staff from our Medical Support Team “IQARUS”, take seriously their job in this environment, constantly checking Trainers and Trainees. “Dr. Denys” and Military Paramedic “Mike” prompting gentle reminders of hydration and sun protection. It is easy to see that they are fully invested in their duty of care for troops, and their sincerity is not lost on the training team who have fully assimilated them as part of the EUTM GAO family.

It’s week three of five before the ever-elusive “Buy In” is achieved. A positive rapport of mutual respect between trainer and trainee has been forged, trust and effort is reciprocal and The KIDAL Company is beginning to believe.

They are beginning to believe that they can be better, that they can work together and achieve the common goal, that they can make a difference. Personal confidence, shattered in many, from effort in often hopeless situations is gradually restored and a competitive more determined mindset now fills this space, reflected in the roars of “SUIVEZ-MOI!” or “FOLLOW ME!”, during squad tactic maneuvers.

Substantial time is spent on the subject of Tactical Casualty Care under Fire. A small but effective knowledge of Pre-hospital trauma care, especially when medical resources are scarce can truly mean the difference of increasing survivability from a field accident or injury.

The Company of trainees will redeploy to their Station in KIDAL within two (2) weeks and what the future has for them is uncertain at best. They will however, be better prepared for that uncertainty. Preparation brings confidence and in times of duress, it will make the difference.

Trainers and trainees wish they had more time but time is an exigency of any military mission and this too is understood by both parties. Nonetheless, the mission objective to improve the military capability of the KIDAL Company has not just been achieved but has surpassed expectation.

The European Trainers draw similarities to their own situation of leaving home for overseas duties to those of these soldiers and their families. The anxiety is tangible and emotive. No one openly discusses the possibilities but all are aware of the risks. The trainers wish the best for their trainees and their families, and do their best to alleviate the uncertainty of the future, best communicated with a friendly smile, a high five or a moment to say “How are you?”

Hearts and minds can never be underestimated. The Malian Families living in The Training area intrigued by our presence. A friendly smile does a lot to ease fears and is welcomed by all.

Quietly whispered is the EUTM trainers desire to accompany their students on their deployment ahead, so far not permitted in combat situations, but indicative of the sense of comradeship between trainer and trainee and the epitome of the military spirit, “You do not leave a soldier behind”.

The sentiment is a broader reflection on the relationship of this mission with our hosts, where perhaps as important as our training objective, is the mutual shared experiences, new friendships and an ability for all of us to understand each other better.

1st COY KIDAL, as an EUTM collective, we thank you for the experience shared, we wish you every luck in your operations ahead and we hope we have made as much a difference to your lives as you have to ours.