EUTM’s expeditionary footprint at GAO: “It’s all about people.”

28 Jun EUTM’s expeditionary footprint at GAO: “It’s all about people.” 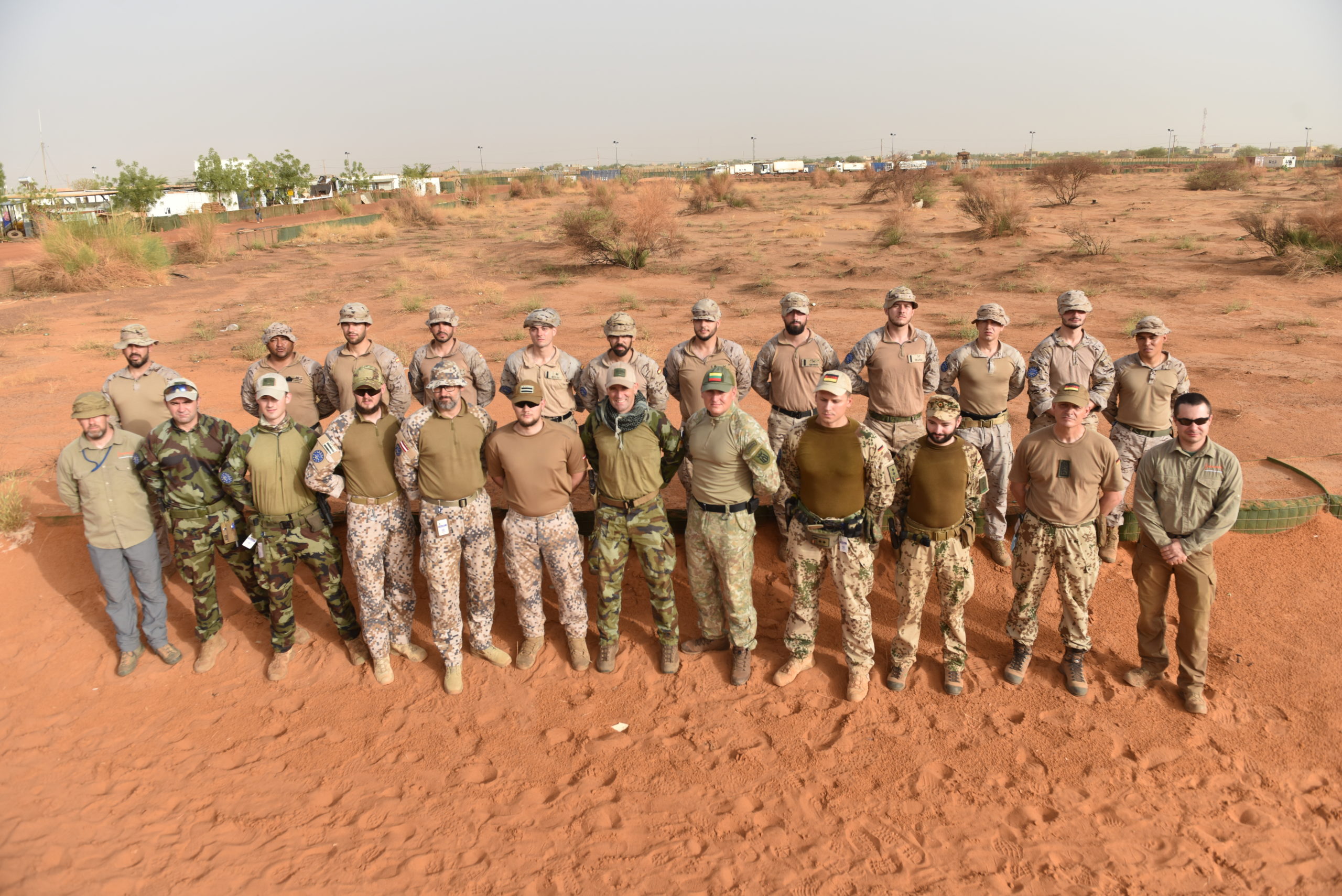 This story is especially dedicated to a tough crew of European Union Training Mission Mali soldiers who move sand hills in austere environment.

Upon arrival at Gao, you are warmly welcomed by Maj K. W. of the Irish Army. Together with Lt F. M., DEU Army, they take the visitors to their duty station, more specifically a small compound located in MINUSMA’s Super Camp and near a graveyard. The EUTM crew call it themselves Hotel California.

“On a bright desert highway. Lot of sweat on top of my head. Warm smell of heat. Rising up through the air.

Up ahead in the distance. I saw a heavy gate. My head grew heavy, and my sight grew dim. I had to stop for the mission.

There he stood in the doorway. I heard the mission bell. And I was thinking to myself: “This could be heaven or this could be hell”.

Then he lit up a smile. And he showed me the way. There were voices down the graveyard. I thought I heard them say.

His mind is expendables-twisted. And he got the duty car. He got a lot of tough, tough soldiers he calls friends.

So I called up the Chief: “Please bring me my holy water”. He said: “We haven’t had that spirit here since our arrival.”

And still those voices are calling from far away. Wake you up in the middle of the night. Just to hear them say.

Mosquitos on the ceiling. The water bottles on ice. And he said: “We are all just soldiers here of our own device.”

And in the master’s chambers. They gathered for the brief. They stab it with their steely knives. But they just can’t kill the heat.

Last thing I remember. There was no electricity. I had to find the passage back. To the place I was before.

“Relax,” said the brave man. “We are programmed to receive. You can check out any time you like. But you can never leave.”

“It is all about people”. The EUTM on-scene-commander, Major K. W. forged a solid team of around 25 multinational soldiers. Thanks to an extraordinary esprit the corps, they are able to perform their duties in an excellent manner from a remote location and in austere environments. The team consists of instructors, force protection and medical personnel. Moreover, everybody contributes significantly to mission successes.

Hence, Gao is separated 1000 kilometers from Bamako, where the Headquarters of EUTM Mali are located. Temperatures are around 45 degrees in the shadow, whilst in the sun temperatures raise until 55 degrees. The water for washing hands and taking a shower is burning your skin. Every soldier requires around 15 liter of bottled drinking water a day.

Because its expeditionary nature, the training mission in Gao is conducted in harsh circumstances. The crew, not to say the EUTM pioneers at GAO, is trying to improve its work and living conditions on a daily basis. So far, it is extremely hard to have both corporate and welfare connectivity. Nevertheless, once you witness their comradeship, cohesion and spirit on the spot, you will never leave Hotel California.

“It is all about people”. The task of the EUTM Gao team consists of training reconciled Malian Soldiers. And, the Malian First Military Region and reconstituted units in Gao, remains for EUTM a first priority Training Audience.

Reconciliation is the process of making groups of people friendly again after they have argued seriously or fought and kept apart from each other. These Malian soldiers have benefited of a Disarmament, Demobilization and Reintegration program, executed by the United Nations Multidimensional Integrated Stabilization Mission in Mali, in warn-torn societies in the Gao-Kidal region.  These former combatants have disposed small arms, ammunitions and explosives. After a controlled discharge of active combatants from armed groups, reintegration focuses on the process by which ex-combatants acquire civilian status and gain sustainable employment and income. The objective is to contribute to the security and stability of Mali so that recovery and development can begin. (Source: MINUSMA).

“It’s all about people”. When training these reconciled Malian Soldiers, EUTM Mali instructors focus on leadership and cohesion. “Suivez-moi” or “follow me” becomes the main motto of the Malian platoon. This was emphasized repeatedly by the EUTM on-scene –commander during his speech to the Malian Platoon after finishing a kind of rehearsal exercise, held on June 18, 2021. Apart from basic military skills, medical care in combat, reaction on improvised explosive devices, and International Humanitarian Law were comprised in the training sessions as well. A long lasting effort from EUTM’s side but with good results.

“It’s all about people”. EUTM trainers are so engaged and so absorbed in their job that they regret having to let the recruits go without being able to support them further on their side. Hence, the non-executive nature of the mandate does not allow EUTM to accompany trained Malian soldiers in combat situations. However, accompaniment is proposed to the 1 MR (First Military Region) and Poste de Commandement Interarmées du Théâtre. At that time, the tough EUTM Gao Team will be able to state “you do not leave somebody behind”.

Hotel California and its occupants exude something extraordinary. You can feel it but it is hard to describe. Maybe I am wrong but I do think they are expendables-twisted. Normally, everybody needs these extraordinary people but finally they do not want to have expendables invited around their table. At Hotel California, it is twisted. It is the other way around. The team does not want to sit around somebody else’s comfortable and copious table anymore. As a souvenir, they like to have the group picture in front of the graveyard. They like the dirt on the training field. They are used to stand the hardships. As long they have degraded communications, you should go and visit them. You have to bring your story to them. These extraordinary men will show you a lovely place and it will be so hard to leave.