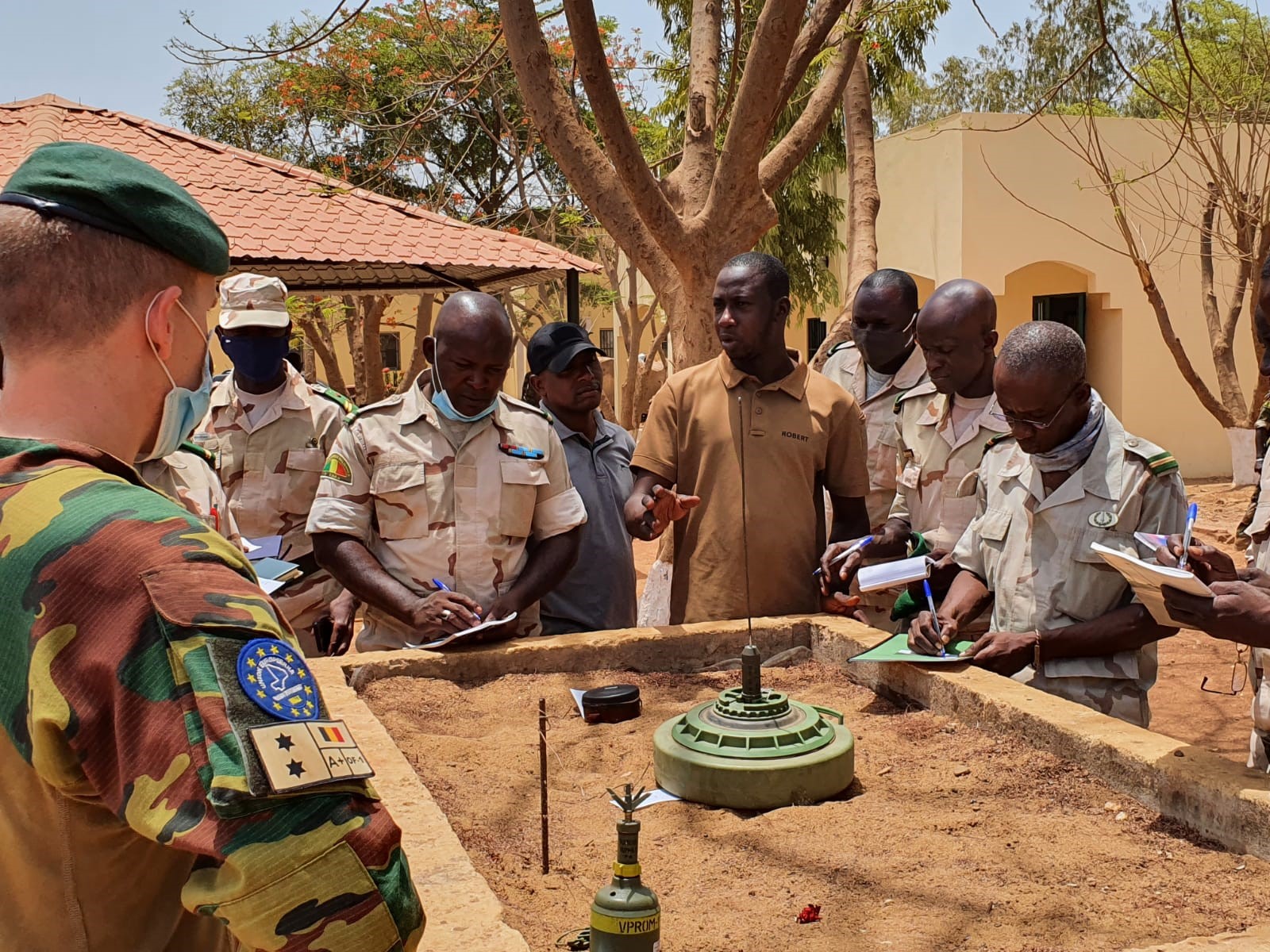 On Monday, April 12, 2021, Studio Tamani reported “Improvised Explosive Devices killed more than 20 people and injured nearly 100 during the first quarter of 2021 in Mali. This is according to a new report by the United Nations Mine Action Service (UNMAS).”

What is an Improvised Explosive Device (IED)? An IED is a device placed or fabricated in an improvised manner incorporating destructive, lethal, noxious, pyrotechnic or incendiary chemicals and designed to destroy, incapacitate, harass or distract. It may incorporate military stores, but is normally devised from non-military components.

EUTM Mali, well supported by UNMAS, provided a Counter-IED (C-IED) course to future FAMa instructors. The train the trainer model provides an effective strategy to equip Malian soldiers and Subject Matter Experts with new knowledge on how to teach others. By the delivery of such a course, EUTM Mali enhances both the IED awareness and the capability of FAMa to counter IED threats. Hence, a more frequent use of IEDs are resulting in a growing threat to host populations, refugees and Internally Displaced Persons (IDPs). While it appears that the intended targets of numerous anti-government and non-state armed groups are the security forces, more and more civilians are indiscriminately killed and maimed.

What is Counter-IED (C-IED) exactly all about? C-IED is the collective efforts at all levels to defeat the IED System of malign actors in order to reduce or eliminate the effects of all forms of IEDs used against friendly forces and non-combatants according to the mission.

IEDs are a major threat for all levels of current and future security operations and it is therefore imperative that national security forces and FAMa are able to prepare for, plan and conduct C-IED activities. C-IED may be undertaken within the full spectrum of operations although it is likely to be a greater factor within hybrid threat environments such as an insurgency, terrorism campaigns and during Stabilization, Security, Transition and Reconstruction Operations. C-IED activities can take place at the local, national, regional, and international level. To defeat the IED threat requires a comprehensive strategy that integrates and synchronizes series of actions and tasks from the tactical to the strategic levels of command and requires interaction with non-military organizations and the populace.

During the C-IED course, EUTM Mali focused on the “prepare the force” and “defeat the device” approach pillars rather than on the “attack the networks”. Most practices for the FAMa graduates of the course were dedicated to Search and Route Clearance.  Emphasis on latter discipline is key as in Mali the Mopti, Gao and Kidal regions, especially the routes linking Mopti (in the center of the country) with the northern regions are affected and dangerous.

What follows is a compilation of advice and recommendations from EUTM Mali to the civilian community for staying safe themselves in first priority and for supporting the Malian Security Forces who are trained in defeating the device.

It is widely acknowledged that there is a major threat from improvised explosive devices and civilians pay a heavy price. EUTM Mali delivers advice, training and mentorship in profit of the FAMa, thus contributing to the stability and development of Mali and the wider Sahel region. All EUTM Mali activities are conducted in close coordination with and in full compliance with Malian requests. The objectives are to contribute improving the capacity of FAMa. By training the Malian Trainer, a new capacity for FAMa has been established to help countering the IED threats and thus protecting the forces and populace against this horrifying threat.