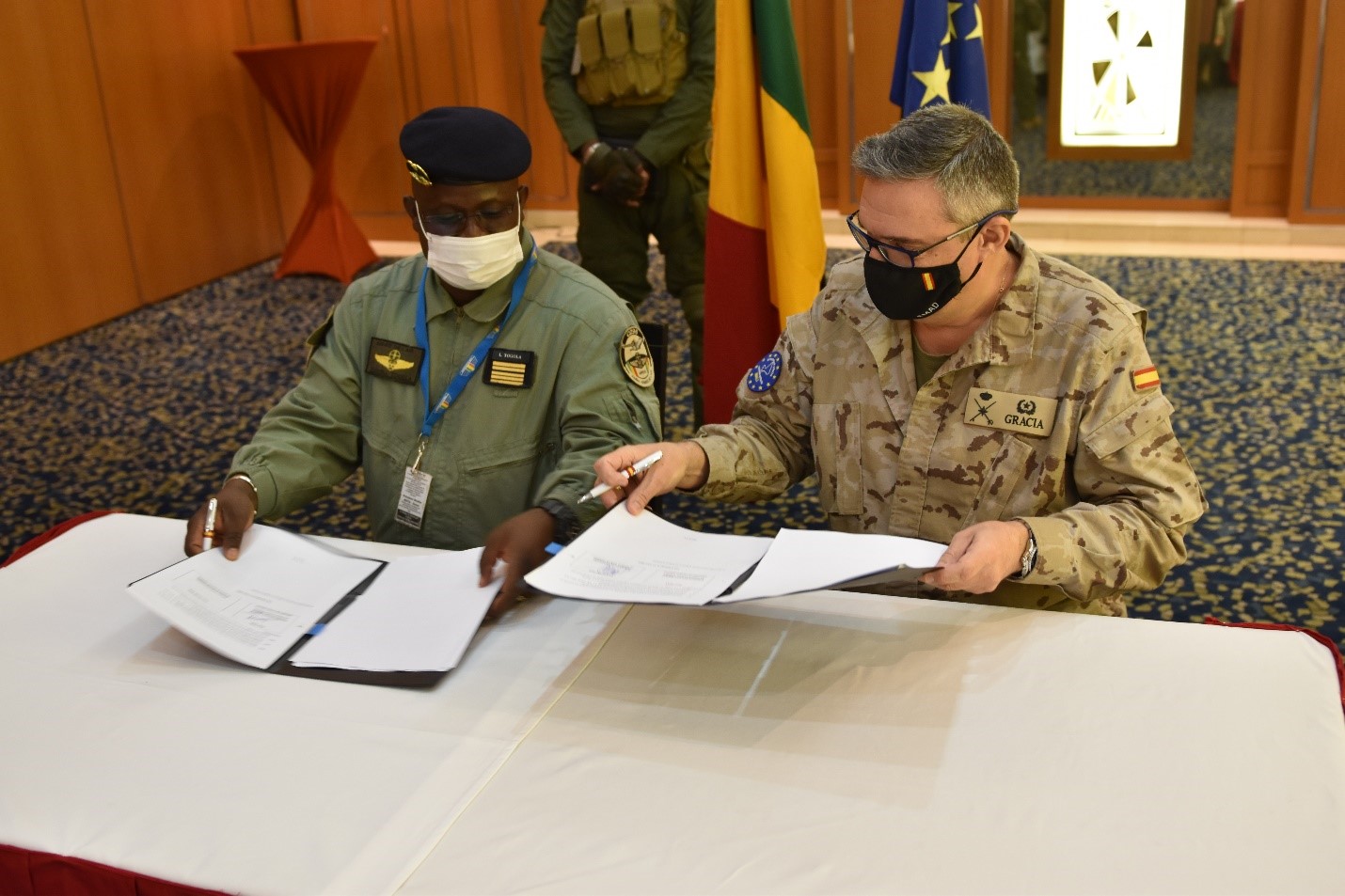 This year 2021 the European Training Mission in Mali celebrated its eight birthday. Since 2013 and on request of the Malian authorities, the European Union Training Mission in Mali provides advice, training and education to the Malian Armed Forces. EUTM is helping the Malian authorities to build an independent and impartial armed force. The EU training force is composed of almost 1000 soldiers from 25 European countries. Regarding EUTM’s structure, the Advisory Task Force (ATF) and the Educational and Training Task Force (ETTF) are by far the most important pillars in the realm of assisting the Malian and G5 Sahel Armed Forces.

Following the strategic review process, the Council of the European Union has decided to extend the mandate of EUTM Mali until 18 May 2024. The Council also authorized the extension of EUTM Mali’s area of operations to provide military assistance to the G5 Sahel countries (Mali, Burkina Faso, Niger, Chad and Mauritania). Supporting the operationalization of the G5 Sahel Joint Force is therefore not a new aspect of EUTM Mali’s mandate. To support the G5 Sahel countries, EUTM Mali will follow a phased approach and engage in support outside Mali’s borders, where conditions and resources will allow it, with priority given to Burkina Faso and Niger.

The Public Affairs Office of EUTM Mali united a panel for an in-depth interview regarding the mission execution. Hence, who else is more qualified than the Mission Force Commander himself, the Deputy Commander, the Executive Staff to explain the activities, achievements and the way ahead of EUTM Mali?

Q.           Col Henkinet, can you tell us about the training mission? Moreover, which different activities is EUTM Mali carrying out?

A.            EUTM Mali is providing advice, trainings and educations to the Malian Forces and G5 Sahel Joint Force. The kind of training ranges from the basic training of soldiers including but not limited to marksmanship and first aid in combat, to the education of General Staff Officers and specialized disciplines such as Intelligence, Counter-Improvised Explosive Devices, Indirect Fires, etc. At every instruction, we ensure that soldiers are given an understanding and appreciation of international humanitarian law. This is something EUTM Mali want to instil in all soldiers it trains and at all command levels. I have to emphasize that whatever training or courses we deliver is requested by the Malian Armed Forces and tailor-made to meet their requirements. Training demands continue to increase significantly and the required course content and training syllabi become more and more diverse. A very important training element for the Malian Armed forces is the train-the-trainer program. The intent is that such a program will one day give the Malian Armed Forces the capability and capacity to conduct training and education courses without external support from EUTM Mali. I witnessed with great pleasure that in the last intelligence course we provided in the second half of May 2021 to FAMa, that three former FAMa graduates were now part of the teaching staff.

Q.           Col Dengra, how does EUTM follow up on the delivered training? Is the impact of the training measured? And, how many people are trained so far? What are the most targeted forces, units or military zones?

A.            At the end of each training or course, we always perform an after action review in order to check whether the learning or training objectives have been achieved and to review the course program. In terms of the impact of our training on soldiers in combat operations, we have to rely on reports of Malian Forces’ successes in the field or from other international stakeholders like MINUSMA or Barkhane. So far, we have trained around 14500 Malian soldiers divided between Malian Armed Forces, Security Forces and Gendarmerie. Most important is that EUTM Mali is here to respond to the demands of the Malian Forces. We are here at the request of the Malian authorities and our activities are conducted in full compliance with Malian requests. Recently, in Gao, we started training Malian soldiers who have embraced the reconciliation program offered by the host nation. We structure the training activities according to two main concepts. First, there is the train-the-trainer concept. This means that the aspirant trainers appointed by the Malian Armed Forces will soon be able to assume their own training events. Next, with reference to leadership, we focus primarily on the lowest echelons of the Malian command structure, who were identified as an important multiplier for the success of their future operations.

Q.           General, what accomplishments gave you the most satisfaction?

A.            Every single accomplishment is a step in the right direction toward making the Malian Forces independent. In particular, the signing of a Technical Agreement with the Malian authorities of Bamako airport for the construction of the EUTM MALI Main Base has brought great satisfaction. In terms of infrastructure, we have also reached a fruitful agreement with a civilian company to host the Intra-Theater Air Transport Unit, which will comprise three Spanish NH90 helicopters to be deployed in mid-June. The increase of decentralized training activities and the definitive extension into Niger and Burkina Faso in the context of “the Fifth Mandate regionalization effort” is another key factor. A first activity in Ouagadougou is therefore expected to start in June.

Q.           Col Boeddeker, apart from the training, does EUTM provide any other support to local security forces? In terms of the equipment, EUTM cannot provide lethal equipment as per EU regulations. In which way does this affect its work? Are there requests, by Malian counterparts, to receive more support by way of the provision of equipment?

A.            Without any doubt, the provision of sufficient equipment and arms remains a key responsibility of the Malian Government. Our capacity building for Malian Armed Forces aims at the improvement of existing infrastructure, as well as the provision of non-kinetic means and resources.
EUTM Mali handed-over the extensions of the demining school at the Engineering Unit compound at Bamako. It is worth mentioning of course, that this project was sponsored by the Grand Duchy of Luxembourg. Luxembourg also sponsored the military handbooks and manuals, which have been provided to the Malian Armed Forces. Apart from EUTM Mali’s capacity building projects, it is well known that many nations in the world donate means and resources to Mali on bilateral basis, too. For example, Germany is contributing substantially to the fight against terrorism in the Sahel by equipping the Malian Armed Forces with some thirty PUMA M36 armoured vehicles. This is in addition to the more than 50 armoured CASSPYR vehicles already provided. This considerable investment is part of the plan to strengthen the resilience and manoeuvrability of Malian Security Units.

A.            The situation in Mali has been complex since 2013 and remains complex, but success is achievable with increased unity of effort. The Fifth Mandate shifts our operational center of gravity from Bamako to the center of Mali. Decentralized activities, including non-executive accompaniment, are a key factor and provide a new level of ambition. New infrastructure is needed to host new capabilities and achieve our operational objectives. All the G5 Sahel countries are now part of the joint operations area. The way ahead is very demanding and EUTM Mali needs firm support more than ever.

Q.           General, last question, you often used the slogan “EUTM Mali makes every day count”. What was the rationale behind it?

A.            Since our early deployment, we are well aware of the challenging tasks resultant from the Mandate 5 Mission Plan. I motivate my staff to work very hard and effectively on a daily basis, knowing that we had little time to accomplish much. On the other hand, I also expect my instructors would give the best of themselves so that the training was delivered to the highest possible standards. Moreover, it was my intent to ensure that all students, be they soldiers of FAMa or G5 Sahel Joint Force soldiers, would be inspired and motivated to do their best in training or educational sessions. In answering this last question, I would like to take the opportunity to thank my staff, my instructors and soldiers for their professionalism and great dedication to the mission. My sincerest thanks for a job well done.

I would also take this opportunity to congratulate the EUMS its 20-year anniversary. While the MPCC is our Operational Headquarters, EUTM Mali has enjoyed the support of the EUMS and benefited from its cooperation and expertise. We look forward to the EUMS contributing to EU security and defense for the next 20 years and beyond.