Posted at 16:12h in News by EUTM Mali Press
Share 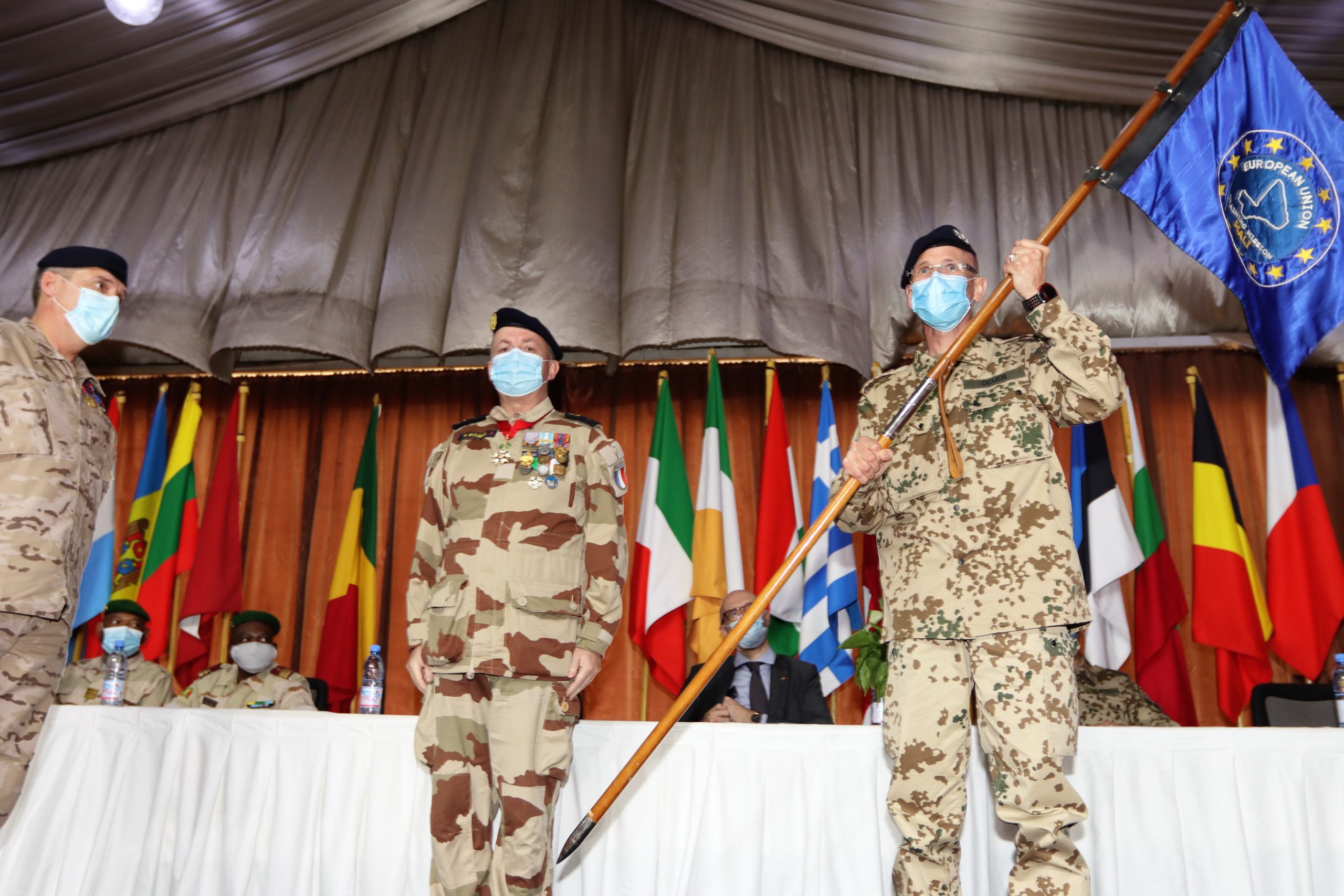 Bamako, July 07, 2021 – The Azalai Salam Hotel at Bamako, the capital of Mali, was the décor for the Change of Command ceremony of the European Training Mission Mali, between outgoing Brigadier Fernando Luis GRACIA HERREIZ (Spanish Army) and incoming Brigadier Jochen DEUER. Both are members of EUROCORPS. The change of command is a military tradition, representing a formal transfer of a unit’s authority and responsibility from one commander to another. The ceremony was under the lead of Vice-Admiral Hervé BLEJEAN, the Director of the Military Command and Conduct Capability of the European Union.

Among the participating guests were the Chief of the Army General Staff of Mali, Brigadier General Oumar Diarra, his Excellence Bart OUVRY (Head of the European Delegation), Major General Carlos Jesus Melero Claudio Chief of Castillejos Division, Brigadier General Francisco Javier Vidal Fernandez (Deputy for Operations to the Chief of Staff, Operations Command) and Major General Josef Blotz (Deputy Commander of Eurocorps) Also many Heads of International Organizations, Missions and Partners as also other Malian civilian and military authorities attended to the ceremony.

With blue sky and 39⁰C the ceremony of the Change of Command started. The first step was to honor the two fallen soldiers, who lost their lives for the European Training Mission in the last years. After this Brigadier General GRACIA used the opportunity to address the audience.

In his speech, Brigadier General Gracia highlighted the Change of Command as an important milestone for EUTM Mali, stressing, that this event is not because he is leaving theatre, but because his successor, Brigadier Jochen DEUER, is stepping in.

Nevertheless, he used the opportunity to thank all persons who have given him their support during his command. After being grateful for his superior’s support, he addressed the honorable Ambassadors and their teams through the Heads of both EUDEL Mali, His Excellency Mr. Bart Ouvry and EUDEL Burkina Faso as well as the Ambassador to Spain, His Excellency Mr. Jose Hornero. Finally, he expressed his sincerest thanks to a dedicated multinational team that makes every day in Mali count. “The EUTM Mali members of the mission, my soldiers are the real heroes of this mission. From the diversity, EUTM Mali is a solid and united project based on their individual absolute personal and professional commitment.”

However, the last thoughts of Brigadier General GRACIA were about Mali, the host nation: “Mali is an incredible country and the Malians are therefore incredible. Mali deserves the very best, something that will surely come sooner or later. A thousand thanks to Force Armees Maliennes (FAMa) for your unsurpassed commitment to giving your people a better life. Mon General, General Diarra, my friend, thank you for your camaraderie and leadership in this enormous challenge. Thank you for your continued willingness and cooperation.”

The departing Brigadier GRACIA is the star of his own end of tour as everyone pours out his or her appreciation for the outgoing leader.  The recollections and anecdotes from close colleagues and friends at the farewell of a much-liked Brigadier do make for an emotionally charged event. However, Brigadier GRACIA stated: “”It is au revoir, never goodbye.”

Next, Vice-Admiral Hervé BLEJEAN paid tribute to the contingent’s performance and highlighted the importance of the mission for Mali: “…Today’s ceremony marks more than 8 years of the training mission’s presence. It is a confirmation of the European commitment to the government of the country and its people, as stated in its mandate. The mission builds on the solid foundation laid by your predecessors in order to develop the military capabilities of the MAF…Through the development of command structures, significant operational and strategic progress has been made for the people of Mali.”

With the takeover of the command, Brigadier General Deuer used the opportunity to present his planning for the next months to the guests present:

“…My approach during the upcoming period will build on what General Gracia has initiated. Having always in mind the Malian proverb: “The hyena chasing two gazelles at the same time will go to bed hungry” I will follow a three-pronged approach, where our efforts and forces need to be focused on … the spirit of decentralized activities…. a training approach that allows Malian Armed Forces bilateral equipment initiatives either by European partners or the EU… and to hone our training and advise to be swiftly adaptable to concrete Malian Armed Forces and G5 Sahel needs at all levels of command.”

This act marked the end of the ceremony, which on the one hand signifies a change in the command of the mission, but on the other hand also the continuity in the support of Mali.