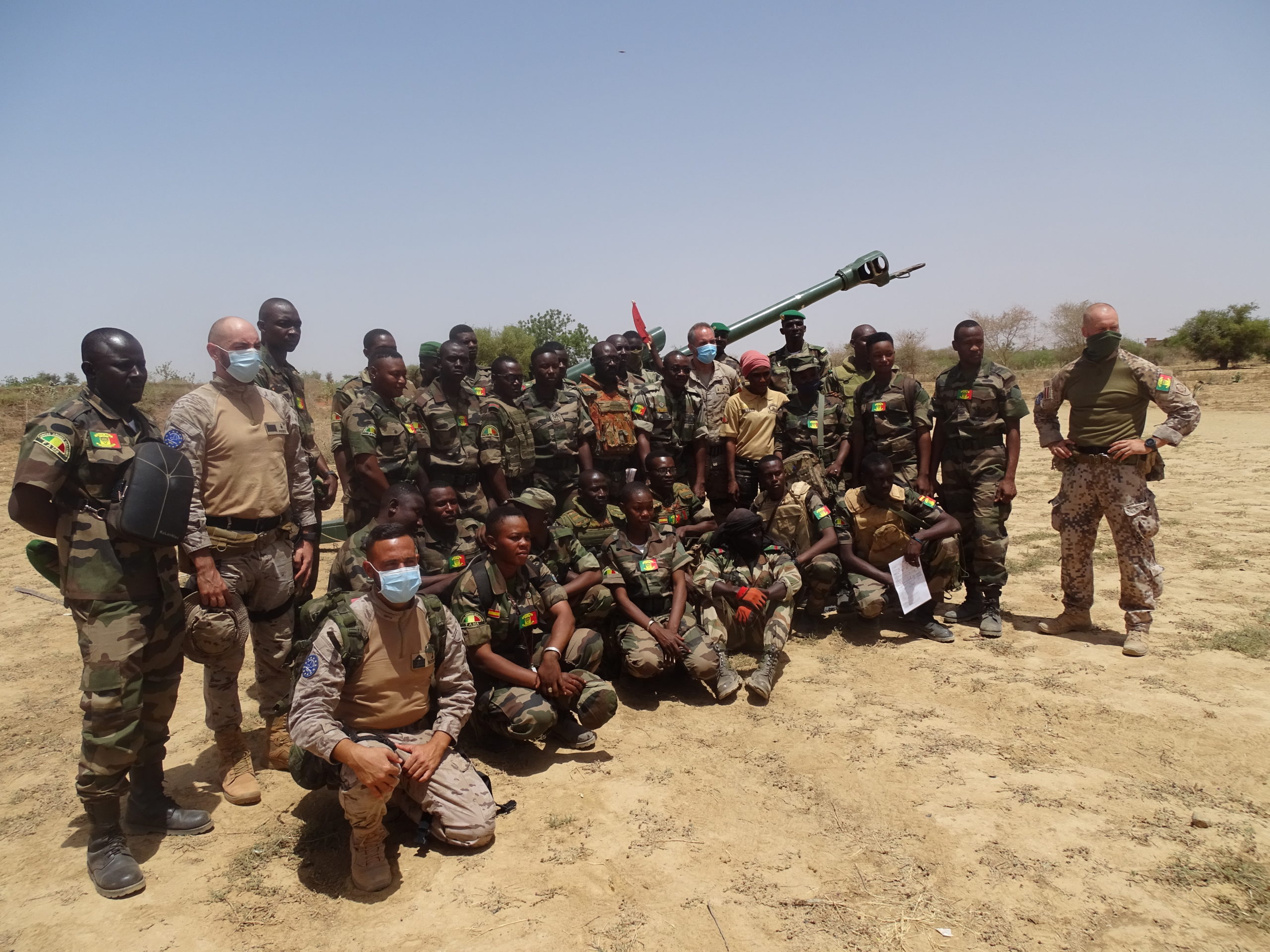 The Public Affairs Team of EUTM Mali, together with freelance journalist Paul Lorgerie, followed a group of very young Malian recruits in the field for 3 days. The fact that these soldiers will become the pioneers, not of the Engineering but of a recently established 614th Field Artillery Battery makes the whole event so special.

Field artillery, a support weapon, is generally a weapon of indirect fire using large-caliber guns. The Malian support unit will serve the D-30, a 122 mm-towed gun.

The D-30 122 mm howitzer is of Soviet Union origin. It is a field artillery piece considered robust and usable in difficult conditions. Its maximum range is 15 kilometers. Although the D-30 is no longer manufactured in the countries of the former USSR, it is still produced and used by armed forces in 60 countries. Soldiers from several western armies have been trained on the D-30 by various user nations in order to be able to train foreign soldiers using it.

Distinctive features of the D-30 include its low mobile mounting and above-barrel recoil system. The three-legged mobile mount is unusual for field artillery, with stabilizers that are clamped together for towing and that are deployed when in action. A large tow linkage is fixed to the muzzle and in transport, the barrel serves as a trail.

Realistically, the maximum of fire of the D-30 will be around 5-6 rounds per minute with a well-trained gun crew. Its users note the D-30 for its simplicity of maintenance. Reputedly, there are no special tools. All jobs can be done by a wrench and large hammer. And, routine maintenance and cleaning are essential.

After the first orders were given to the different teams and the soldiers made their way to their respective zones, a timid boy stepped up to us.  He was shabbily dressed and with gestures, he tried to explain that his footwear was broken. A bottle of water and a banana put him more at ease. Suddenly he said “mamma dead”. Ali is eleven years old. Every day he followed from a distance the training of the young Malian soldiers, future artillerymen and -women, who could have been his older brother or sister. The average age of the group of Malian soldiers is 20 years.

During the first Malian dry run, the PAO-Team focused on both the topographic team and the gun crew (or firing unit).
The topographic reconnaissance section is responsible for surveying the positions where the battery will move, determining its geographical coordinates and assigning the orientation of the pieces in order to link them to the reference system. Who could do this job more accurately than the young ladies of the TOPO Team?

The gun crew implements particular actions and elements of the howitzer. The location chosen for the installation of the D-30 must be as flat as possible. First, the carriage is lifted by an internal hydraulic cylinder located under the barrel cradle. Once the barrel is at the required height, the wheels are lifted by the wheel lift lever, which separates the two split stabilizer legs from the single stabilizer leg and brings them to the rear in the firing configuration. The legs are then locked in place with locking pins. The carriage is lowered by the hydraulic cylinder so that the legs touch the ground. Integrated stakes are then driven into the ground. At this point, the gun is ready. What follows is the preparation of the ammunition to be fired. After receipt of a warning order from the Fire Direction Center, the crew loads the howitzer and traverse and elevate the tube to the required point, using the hand cranks.

On the second day, Ali returned. We had prepared some sandwiches for him. But he had brought his younger friends. Ali was the oldest and he divided his breakfast between Popiteau, Cassime and Jugnot.

With the pennies we had slipped him the previous day, he had nevertheless bought a new T-shirt, pants and a notebook at the local market. We stayed in the vicinity of the Fire Direction Center (FDC). With a stick, he wrote numbers in the sand. The firing data?

“Ali, what do you want to do later?” Artilleryman. “And you Popiteau?” “Journalist.” PAO replied, “Then you must study well and work hard. Promised?”

The little guys were good at the countdown: “four, three, two, one, fire, …. boemmm”.

During several dry runs, the PAO-Team focused during the second day of training on the Fire Direction Center.

The FDC computes firing data, fire direction, for the guns. The process consists of determining the precise target location based on the observer’s location if needed, then computing range and direction to the target from the guns’ location. This data can be computed manually, using special protractors and slide rules with precomputed firing data. Corrections can be added for conditions such as a difference between target and howitzer altitudes, etc.
The FDC will transmit a warning order to the firing unit, followed by orders specifying the type of ammunition, fuze setting and propelling charge, bearing, elevation, and the method of adjustment or orders for fire for effect. Elevation and bearing orders are specified in mils.

The last day of training marked the finals for the aspiring artillerymen and women. An extra effort was required from the Malian soldiers before the graduation ceremony would take place in the afternoon.

PAO and Paul were extremely busy conducting interviews with the EUTM course leader and the Second Commander of the 614th FA-Battery. However, we also managed to find the Malian Forward Observers Team.

In the vicinity of the supported troops, at the contact line, the forward observers act. At this level, they observe, guide the shooting and transmit the corrections. The forward observer has simple means, such as binoculars, compass, maps and well-known rules of shooting. Firing begins with an adjustment phase where only a single gun fires, and if the rounds are not accurate, the Forward Observer will issue instructions to adjust fire. When the degree of accuracy is acceptable, the Forward Observer will then typically call “fire for effect”. A “Fire For Effect” calls for all of the guns or tubes to fire a round.

And suddenly, around lunch time, Ali was back on his post to say farewell to us. He had kept his promise by going to school. There is no doubt he will become one day a gunner.

In the afternoon, around 15:00 the Malian artillerymen and women received their certificate during a graduation ceremony. One could notice mixed feelings among the graduates. On the one hand, all soldiers were proud and happy that they had made it to a successful end and on the other hand, they had a hard time saying goodbye to the EUTM instructor team after nine weeks of teaching, close cooperation and mentorship.

A new capacity for the Malian Armed Forces.

The enemy is engaged at such distances that gunners cannot see the target that they are firing upon. Since the target is not visible, these gunners have to rely on a trained artillery forward observer, who sees the target and relays its coordinates to their Fire Direction Center. The Fire Direction Center, in turn, uses these coordinates to calculate the specific direction, elevation for the gun, the amount of propellant and fuse settings, which the gun crew use for their gun and ammunition.

Captain DE LA PENA (ESP), the EUTM course Director, highly praised the state of mind, the courage and the commitment of the trainees throughout the training. “If today is the end of the training, it is indeed the beginning of the 614th FA-Battery.”
And, Luitenant M.D., Second Commander of 614th FA-Battery, said on behalf of the Captain A. D., the Commander of 614th FA-Battery: “Artillery shoots at targets kilometers away… But I cannot fail to thank the EUTM instructors team wholeheartedly for their dedication and professionalism during the course of instruction.”

Another shot in the rose. Apart from the artillery exercise, PAO also scored a bull’s-eye by contributing within means and resources to the European Union’s actions (dated March 24) to uphold child rights and support children in need.