EUTM Mali | THEY MAKE IT FEASABLE FOR THE FUTURE OF MALI
27060
post-template-default,single,single-post,postid-27060,single-format-standard,ajax_fade,page_not_loaded,,qode-child-theme-ver-1.0.0,qode-theme-ver-9.4.1,wpb-js-composer js-comp-ver-4.12,vc_responsive

THEY MAKE IT FEASABLE FOR THE FUTURE OF MALI

11 Oct THEY MAKE IT FEASABLE FOR THE FUTURE OF MALI 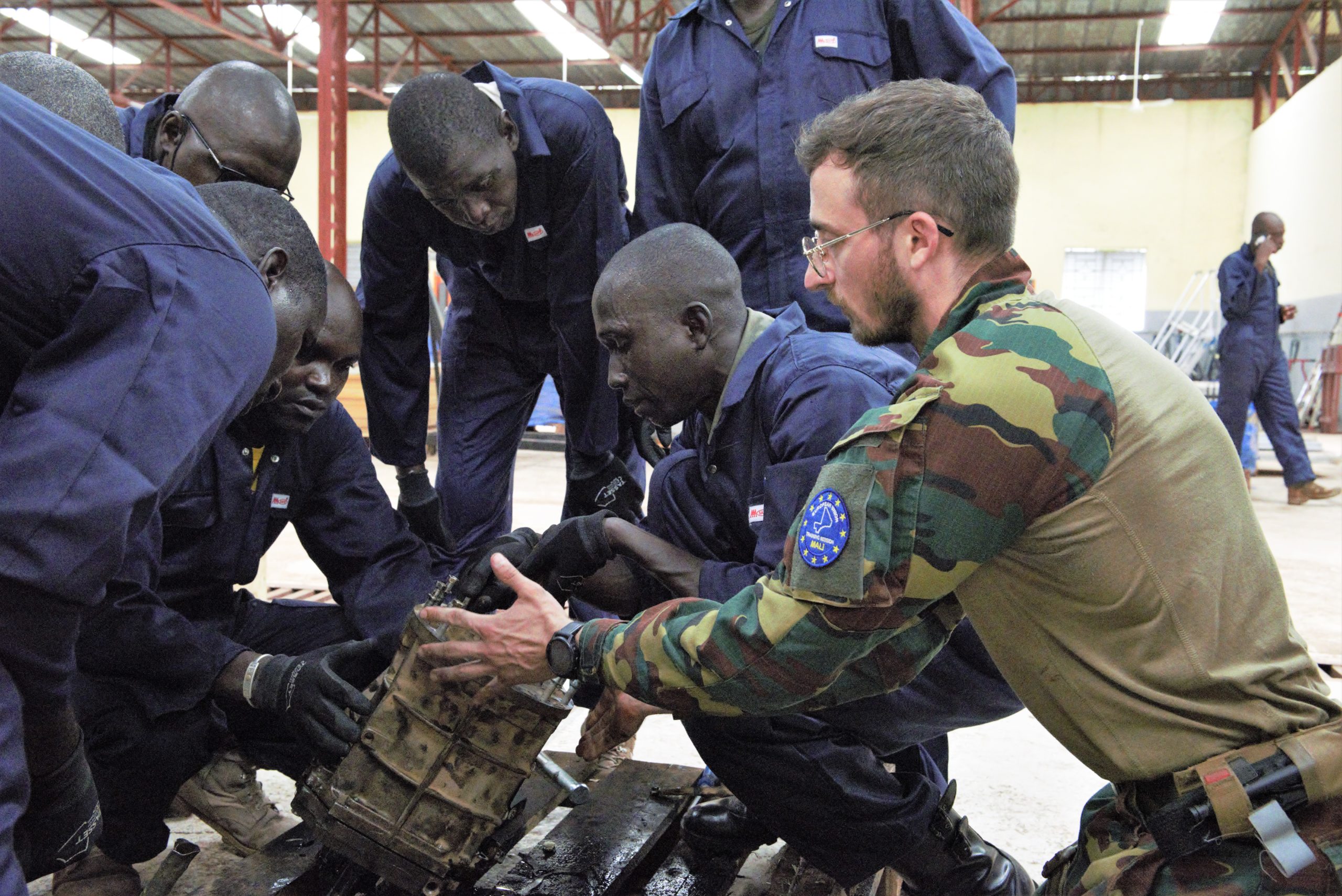 EUTM Mali supports the Malian armed forces in a variety of areas. The spectrum ranges from training combat units in infantry tactics, counter-IED or first aid to advising the Malian general staff. Maintenance and logistics are another important area, because without them nothing runs.

The air stings on this day in Kati at the 37th regiment of the FAMa (Force Armees Malienne). About a dozen Malian soldiers are working in high humidity in the new maintenance halls built a few years ago on the initiative of the German army. The men proudly wear their new blue overalls and are concentrated on their work while the instructors give them advice. Training time at EUTM Mali.

The training is requested by the Malian General Staff

The course was explicitly requested by the Malian leadership, as logistics and maintenance are to be given high priority in the small Malian army. Although the Malian army has received a number of vehicles from a variety of partners in the past, including from Europe, on the other hand, the armed forces are often in combat against terrorists and the conditions in the military regions are also quite demanding for the material. That is why the Malian leadership does not want to leave it at this one round, but has requested further rounds of training until the end of the year.

Although the Malian soldiers already have prior knowledge, the instructors of the European Union Training Mission (EUTM) naturally have to explain certain details. Especially when it comes to repairing complex parts like the gearbox of a FAMa pick-up. The intention is to dismantle the vehicles into their individual parts. This way, the Malian mechanics can learn without risk and see the results of their work, because during disassembly and reassembly, their European instructors are there to help and advise them. Then it is time to put them back together again. After all, the vehicles are supposed to be fully operational again.

Visit of the Mission Force Commander

A week before the end of the course, the mood is good – not only because of the expected graduation ceremony, at which high-ranking representatives of the Malian leadership will be present to present certificates and badges for the uniforms, but because Mission Force Commander EUTM Mali, Brigadier General Jochen Deuer, himself a logistics expert, has announced his attendance. For the Malian soldiers, this is a special honor and something you don’t see every day, as there is only one active general in the Malian armed forces and that is their Chief of Defense. Accordingly, the Malian trainees work hard and motivated. Brigadier General Deuer lets the Malian soldiers show him the material and the work steps in detail. What strikes him, however: Despite the generally good condition of the hall and the machinery, there is a lack of things to do on a daily basis, such as tools. Due to the difficult general supply situation in Mali, it is very difficult for the Malian armed forces to get hold of high-quality material. The commander pledges his support: a large list of materials, tools and workshop equipment will be procured in a timely manner.

On with the training. After all, the boys have to know what to do. In a few weeks, they will be the trainers themselves, because the training concept at EUTM mali is: “train the trainers”. To take on more responsibility for material and personnel, to have a real impact on the material operational capability, which is very important for the success of FAMa in its fight against the terrorists – that is the goal. A motivation that you can see in every training participant.

The best of them are selected to be trainers for the mechanics of the Malian armed forces in the future. They not only feel well prepared – they are!