LEARNING TO TREAT WOUNDED IN COMBAT

Posted at 10:46h in News by EUTM Mali Press
Share 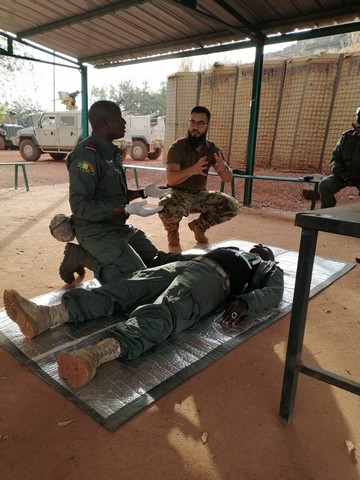 The Medical Instructors Course was conducted at the Koulikoro Training Camp (KTC). It took place over four weeks and attended by several trainees of the Malian Armed Forces (MaAF). The aim of the course was to teach the principles of Tactical Combat Casualty Care (TCCC), MARCHE Protocol and basic first aid. The trainees learned TCCC is designed to treat battlefield casualties in line with clinical guidance timelines. The MARCHE Protocol emphasis is on arresting haemorrhage by using tourniquets and haemostatic dressings as well as basic casualty management from point of injury to the evacuation platform. This was underpinned by learning instructional skills in order to allow them to instruct their fellow soldiers on their return to unit.