EUTM Mali | INTO THE HEART OF NCO TRAINING
26924
post-template-default,single,single-post,postid-26924,single-format-standard,ajax_fade,page_not_loaded,,qode-child-theme-ver-1.0.0,qode-theme-ver-9.4.1,wpb-js-composer js-comp-ver-4.12,vc_responsive

INTO THE HEART OF NCO TRAINING

11 Aug INTO THE HEART OF NCO TRAINING 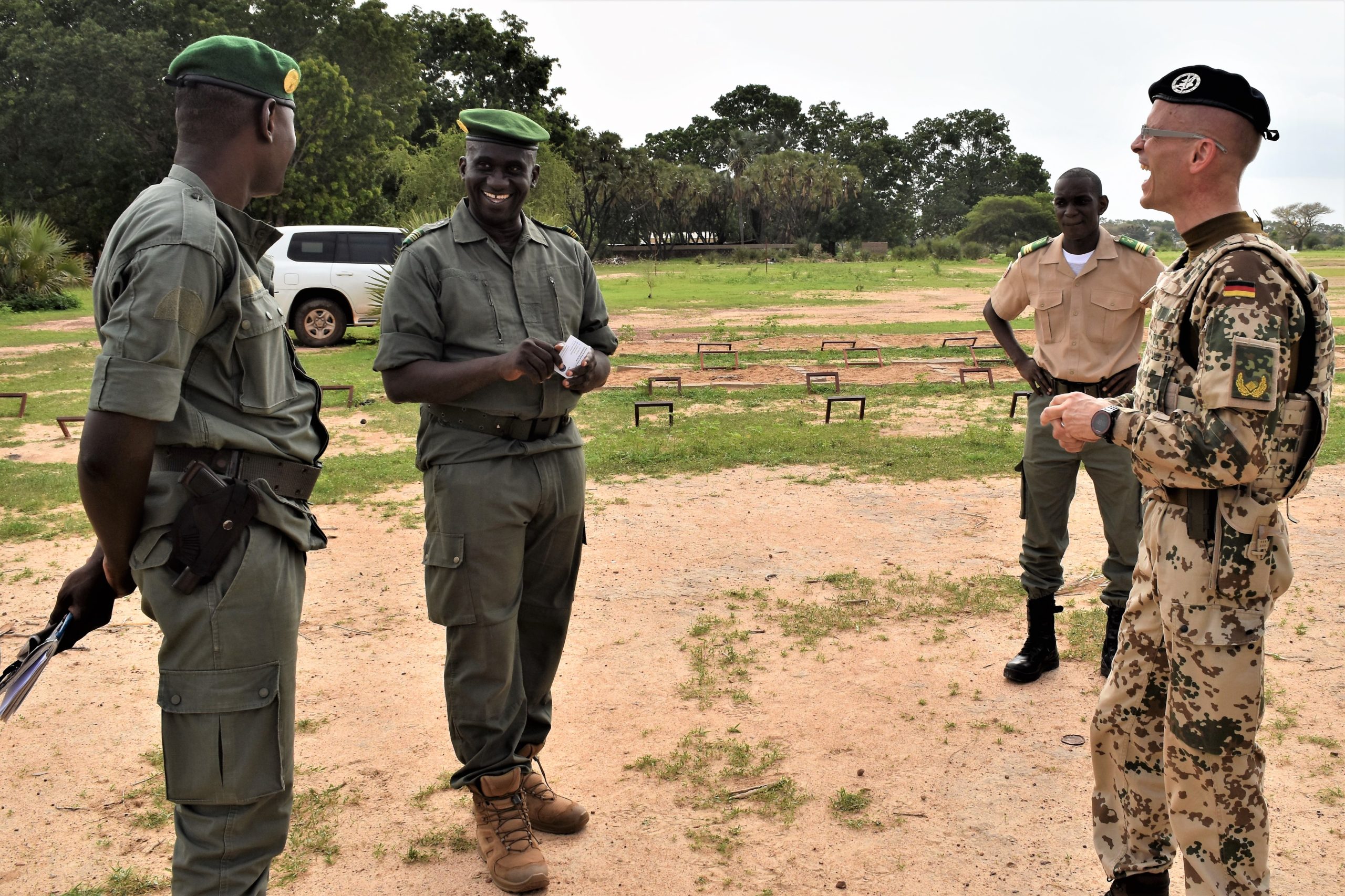 Thursday morning in Bamako. It is overcast, 35 degrees, with high humidity. Although it’s the rainy season, it’s not raining today, and that’s a good thing, because the Mission Force Commander EUTM Mali, Brigadier General Jochen Deuer, is on his way today with an NH-90 transport helicopter to Segou, a key region for the Malian armed forces.

Segou is home to the Malian Armed Forces NCO School (FAMa) and the headquarters of Military third Region. The NCO School in particular plays an important role in the mission of EUTM Mali, as it is here, that the current and future leaders/trainers of the Malian Armed Forces are trained. Finally, the 5th mandate significantly expands the operational radius of EUTM Mali through decentralised training. For EUTM Mali, this means, that mobile training teams are on the spot and support the training efforts. This will lay the cornerstone for the future structure and hopefully for the success of the Malian armed forces.

But before that, the journey starts at President Modibo Keita International Airport. This is where the Spanish NH-90 detachment has been stationed since the beginning of July 2021, significantly increasing the mobility of the mission. Finally, the 5th mandate significantly expands the operational radius of EUTM Mali through decentralised training.

Before boarding the helicopters, the soldiers, including the general, have to be weighed together with their weapons and equipment so as they do not exceed the permissible payload of the helicopters. Everything is in order! Now it’s time to board.

For safety reasons, the NH-90 is accompanied by a second aircraft.  Then the helicopters take off in the direction of Segou.The helicopters need a little more than an hour to cover this distance; on the ground it would have taken more than five hours, as the road conditions are quite challenging. What is striking is the amount of green that can be seen on the ground.  Until recently, everything here was grey, brown. Now, with the onset of the rainy season, everything is slowly turning paradisiacal green, not only directly on the Niger, but also away from it. For Malian agriculture, this means that the time for sowing and field work begins. Millet and rice are particularly popular on the flooded areas along the Niger.

Then the helicopters reach Segou. The landing site is a military area. The reddish-brown colour of the dust kicked up by the helicopters is striking. After the security has given the green light, General Deuer disembarks from the helicopter. A military convoy is already waiting to take him first to the headquarters of the military region, where he is already expected by the deputy commander, Colonel Dembele. As it is the first visit for Brigadier General Deuer, there is a lot to discuss. The chemistry between the two partners is right from the start. In addition to the security situation, the Mission Force Commander is particularly interested in the concerns and needs of the FAMa units on the ground.  Colonel Dembele readily explains the situation. EUTM Mali is a valued partner on the ground, as the impact of the training already carried out is beginning to bear visible fruit, especially among the non-commissioned officers and young officers. Together, they agree to regularly exchange information on the situation and developments.

Then it’s off to the trainer camp.  For Mission Force Commander Deuer, this is a matter of the heart, as trainers and Force Protection live here for weeks in a very confined space. It is a small, safe oasis in the area, and with the small huts under the tropical trees it is also a little homely. So it is a good opportunity to talk with the people. Besides the soldiers of the Force Protection, the small medical area and the direct conversation with the trainers are on the agenda. After all, they work with their Malian comrades every day and can also provide important information on how successful the training is or where improvements may still be needed.

After a short lunch, the next station of the journey is the Malian NCO school. Here, Brigadier General Deuer is received with military honor. With sabre and jagged messages he is reported to and then the members of the school staff are introduced to him. This followed by a short visit to the office of the school commander, lieutenant colonel Sogoba, who is visibly pleased about the presence of the EUTM Mali commander at his school. Within a small briefing he explains the current experiences. A major focus of Malian support requests goes towards NCO training. After some painful experiences, the leadership of the Malian armed forces has realised that a not insignificant part of their losses is due to the lack of training and experience of their leadership corps, which then leads incorrectly in crisis situations. They want to remedy this and, due to the tense security situation, significantly increase the Malian armed forces. For EUTM Mali, this would mean a significant increase in the current training workload, although the Malian soldiers make no secret of their appreciation of European training across all ranks.

The visit ends with a tour of the school. Some of the rooms already reach a quite high standard. The digital firing range makes an extremely effective impression, so that the Mission Force Commander and the head of the Advisor Group don’t miss the opportunity to shoot a round with the AK. The result: A bit rougher and a less familiar stopping point than with the European handguns. Then it’s off to the language lab. Here the Malian school commander has a direct request to EUTM: due to the high temperatures, they have problems with the cassettes of language training used so far. They would like digital listening devices such as small, commercially available MP3 players. Perhaps EUTM Mali is able to help there.

Then it’s time to return to Bamako. Due to the rainy season, the weather is unpredictable and a rain front can ruin the return flight. After about an hour, the helicopters reach Bamako Airport. For the Mission Force Commander, this is the first opportunity to make connections in the field and to get a feel for the concerns and needs of the Malian partners. He has already picked up at least one focus for the mission on this trip: There is no way around EUTM Mali in terms of high-quality training for Malian non-commissioned officers if you want to get a grip on Mali’s security.