Posted at 15:00h in News by EUTM Mali Press
Share 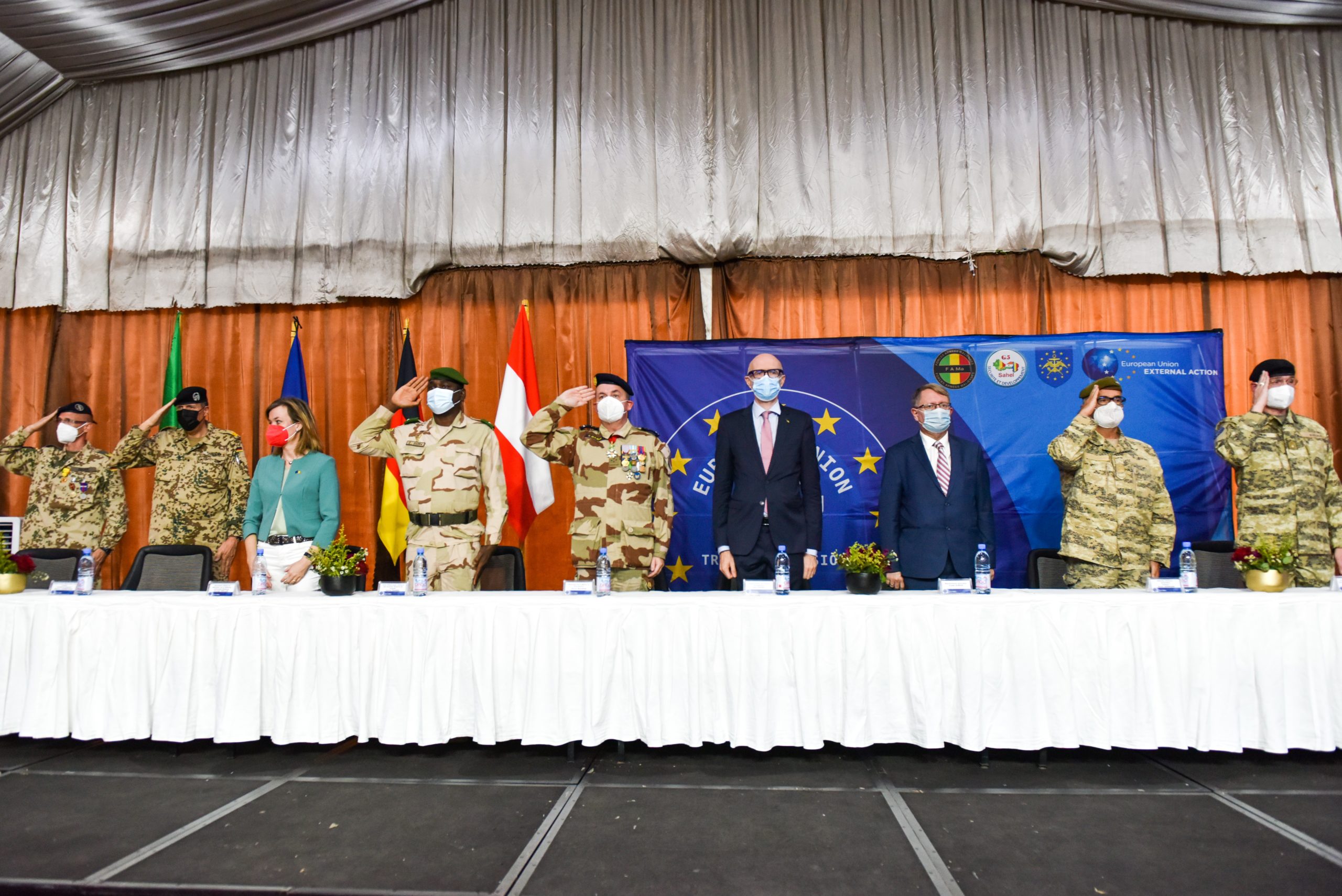 Bamako, December 21. In the capital of Mali, at the Azalaï Salam Hotel, the Change of Command ceremony for the European Union Training Mission Mali (EUTM Mali), between outgoing Brigadier General Jochen DEUER (DEU) and incoming Brigadier General Christian RIENER (AUT) took place. The Change of Command is a military tradition signifying a formal transfer of the responsibility for the mission from one commander to the next. The ceremony was led by Vice Admiral Hervé Bléjean (FRA), Director of the Military Planning Conduct Capability (MPCC) of the European Union.

The first step was to honor the two fallen soldiers, who lost their lives for the European Training Mission in the last years.

In his speech, Brigadier General DEUER expressed his deep gratitude to all for a commitment towards common partnership, aims and engagement for Mali. His focus over the last six months were the Malian armed forces (MaAF) needs and requirements, deepening cooperation with MINUSMA, BARKHANE, EUCAP and multiple other actors in view of providing the MaAF the type of training they need. Moreover, he put emphasis on strengthening the center of the country. Decentralized training has started on a more permanent basis in GAO, SEVARE and SEGOU.

In view of the mission’s second pillar, supporting the G5 Sahel joint forces, with a regionalized approach of EUTM Mali, training and advice is offered with initial training steps in Burkina Faso, and a liaison element in Niger. Finally, Brigadier General DEUER appreciated the time spent in Mali and the privilege of cooperating with MaAF and saluted them for improving their capabilities and capacities.

Vice Admiral Hervé Bléjean (FRA), Director of MPCC, emphasized that this ceremony marks the continuing training mission’s presence and confirmation of the European commitment to the Malian people. He thanked the Chief of Staff of the Malian Armed Forces, and all the authorities in Mali who are working together to make the country and the region more secure.

He greatly appreciated the outgoing Brigadier General Jochen DEUER as EUTM Mali Force Commander in a very busy and demanding period, reflecting the complex environment that has existed for years, appreciating the progress made regarding many projects. Vice Admiral Hervé Bléjean commended the commitment of Brigadier General DEUER to the mission, in these difficult times, which deserves ‘all of our’ gratitude.

Finally, the new Mission Force Commander Brigadier General Christian RIENER underlined that EUTM Mali is continuing its mission to advise, assist and train the Malian Armed Forces and to support the forces of the G5 Sahel with a strong commitment.

He highlighted that he intends to build on the momentum of projects already launched in view of making a significant contribution in the sense of an integrated  approach to ensure the continuity of working together, having in mind a medium and long-term approach, including “train the trainer” courses, but also topics such as human security, international law and human rights.